Posted by teetswk on Wednesday, April 8, 2020 in Stellar Finds. 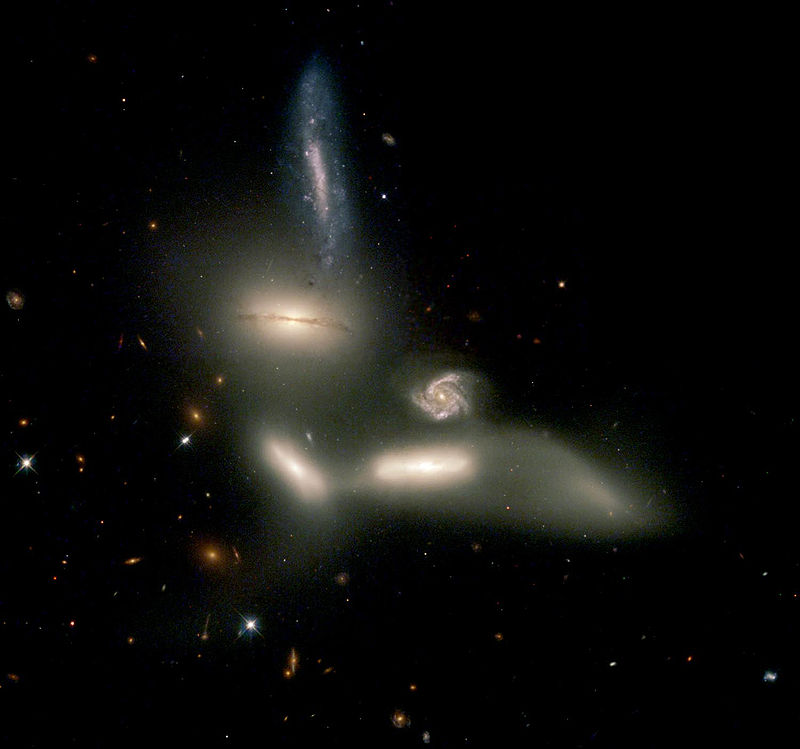 Galaxies are often very photogenic.  There are roughly as many galaxies in the observable universe, each with millions to over a trillion stars, as there are individual stars within our own galaxy, the Milky Way.  If you do the math, that means there are more stars in the universe than there are grains of sand on all of the beaches of Earth.  Space is big.  Our nearest large neighboring galaxy, the Andromeda Galaxy, is over 2 million light-years away, making it seem that our galaxy is pretty well isolated in the universe.  On large enough scales, however, we see that galaxies form small groups, large clusters, and even huge superclusters.

Seyfert’s Sextet forms just one of those small groups.  Pictured in the above image from the Hubble Space Telescope, this galactic group was discovered by Dr. Carl Seyfert while examining photographic plates from the Harvard College Observatory. Carl Seyfert’s wife, Muriel Mussells Seyfert, performed the photometric measurements to determine the apparent brightnesses of the galaxies. It was originally thought that the group consisted of six galaxies positioned very close together in space, making up the densest galaxy group known at the time. Closer inspection revealed that the faint  “galaxy” on the far right was merely a tidal tail of one galaxy that resulted from gravitational interactions with at least one other galaxy in the group. Seyfert also noted that the face-on spiral galaxy appeared abnormally small compared to the other galaxies of the group. It was later determined that the galaxy was about seven times farther away than the rest of the members and thus not actually part of the group itself.  Over time, gravity will merge the four neighboring galaxies into one larger object, likely an elliptical galaxy.  Oh, and those little orange specks littering the image – those are just more galaxies much farther away.

Tucked up among the wooded hilltops of northern Brentwood, Vanderbilt Dyer Observatory is considered by many to be a hidden treasure of the area. Visitors to our satellite campus not only learn about some of the cutting-edge discoveries and science in astronomy but they also get a dose of nature, history, and many other things while here. Over the years, we at Dyer Observatory have made the preservation of our facility and grounds a key mission. Preservation not only entails things such as maintaining our telescopes — it also includes keeping a record of days passed. Since 1953, we have amassed a number of interesting images, pieces of equipment, and ephemera. Every day tends to bring new surprises. In continuing our tradition of public education and outreach, Stellar Finds provides regular postings of images and descriptions of the diverse paraphernalia associated with Vanderbilt Dyer Observatory and the history of astronomy at Vanderbilt University.