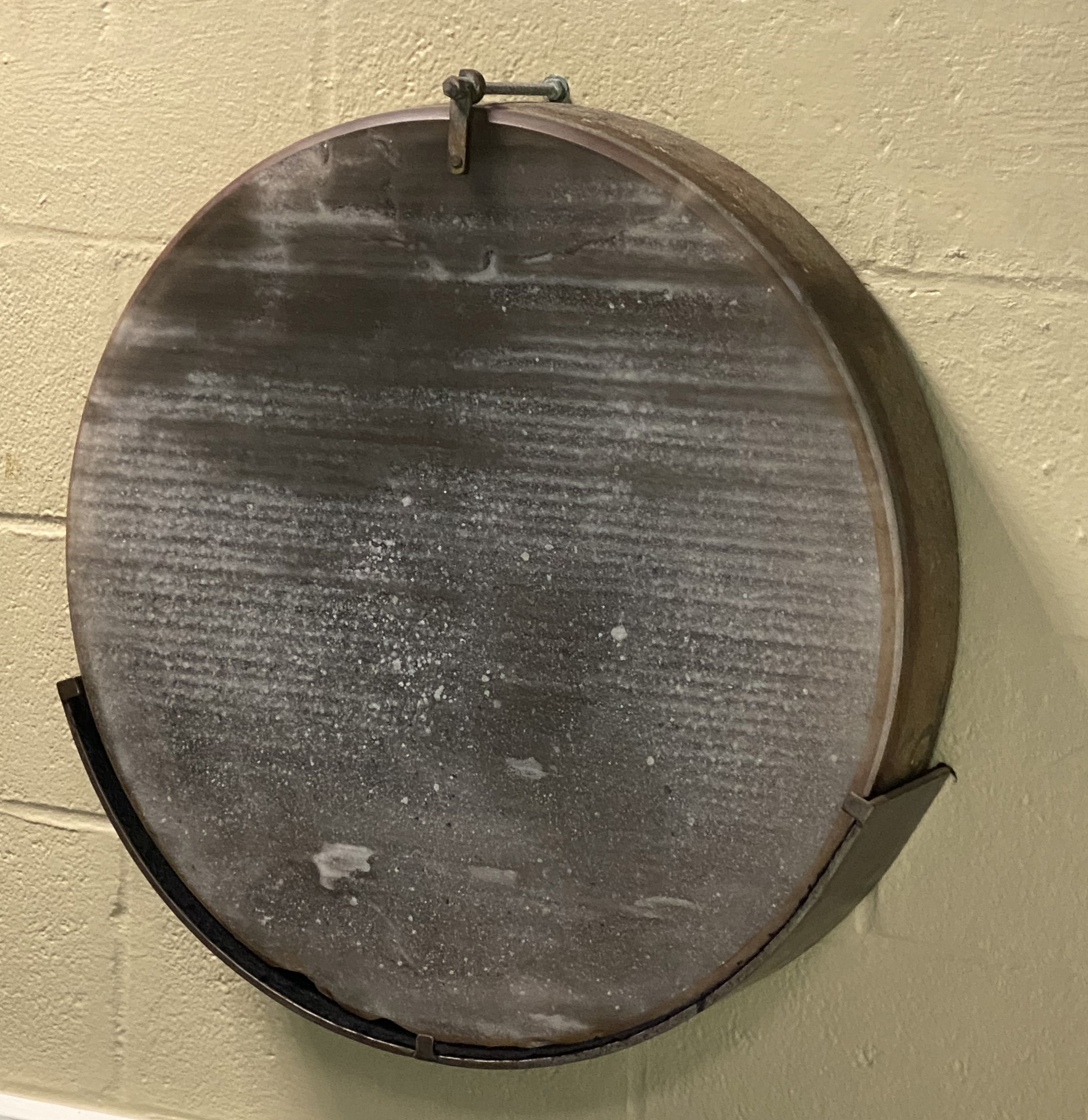 Vanderbilt University’s Dyer Observatory owes its existence to this 24″ fuzed-quartz disk, which unbeknownst to many first-time visitors to the observatory, is actually an uncoated (no reflective layer) telescope mirror.

Vanderbilt University’s acquisition of this mirror, formally known as the Ferguson fused-quartz disk, began around June 1943. The 24″ mirror was made by John Ferguson as part of an experimental project with General Electric (GE). A fused-quartz disk was thought to be ideal for use in telescopes because it would expand less than other types of glass, including heat-resistant glass when subjected to heat and cold. This would minimize the amount of distortion of the mirror’s curvature caused by expansion and contraction and, thus, optimize image clarity. Although GE had hoped to produce a 200-inch fused-quartz disk for a telescope at the Mount Palomar Observatory, the 24″ disk was the largest that could be made.

Elma Ferguson and Grace Ferguson Haugh, daughters of John Ferguson, were interested in donating the mirror to a university as a memorial to their father. In 1943, the mirror was already fifteen years old and located in a barn at the former family farm in Eldora, New Jersey, with the mounting in another location. Dr. William Yandell Elliott, a professor in Harvard’s Department of Government and a Vanderbilt University alumnus, contacted Vanderbilt’s Chancellor Oliver C. Carmichael about the proposal. Carmichael responded with interest in the donation of the mirror, yet admitted the university’s reluctance to accept the gift due to the lack of a suitable building on the campus to house the telescope. The Vanderbilt astronomy department’s concerns, as relayed by Carmichael, included the atmospheric conditions on the campus and the small size of the existing Barnard Observatory. A new building to house the telescope would be ideal, but the cost involved in its construction, without significant financial assistance, could preclude the university from accepting the gift. To help alleviate some of these concerns, Carmichael suggested establishing a time-limit for the donation; the university would construct a building for the telescope by five years after the end of World War II. The Ferguson sisters agreed to the terms and asked Vanderbilt University to go ahead and take possession of the gift, to which the university agreed. On March 16, 1944, Carmichael wrote to Elma Ferguson confirming Vanderbilt’s receipt of all of the various parts of the donation, including the mirror and mountings.

Dr. Carl K. Seyfert, a Harvard University graduate and the first director of the soon-to-be-established Dyer Observatory, joined the physics and astronomy department of Vanderbilt University in 1946. Seyfert was charged with building an observatory to house a telescope using the donated 24″ fused-quartz disk, which would prove to be challenging. Seyfert, however, proceeded to invigorate Vanderbilt’s astronomy program by adding new courses and lobbying for a new observatory. Along with his university duties, he lectured to the public and was also a television weatherman for WSM-TV.  These engagements enabled Seyfert to campaign for the observatory throughout the community. Seyfert’s efforts would prove not only fruitful for the establishment of the observatory but also in proliferating the interest in astronomy within Nashville and its surrounding areas.

Unfortunately, the Ferguson fused-quartz disk did not work in the specially designed telescope for the Dyer Observatory, which would later become known as the Seyfert Telescope. The telescope’s final 24″ mirror would be made of Pyrex. Despite this, the mirror had made its mark in history. Dr. Robert Hardie, astronomer and former director of Dyer Observatory, summed up the contributions of this mirror perfectly: “Thus, although the attractive thermal properties of quartz were not to be had, the mirror blank nonetheless made a singular contribution to astronomy by being initially responsible for bringing Seyfert and an active observatory to Vanderbilt University.”