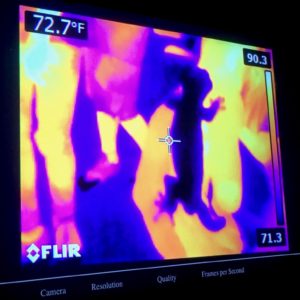 When we set out to show you science in a whole new way, we often mean that literally. A popular demonstration we include in our summer camps showcases infrared light. Infrared (IR) means “beyond the red” and is typically not visible to human eyes. Its relatively long wavelength puts IR on the electromagnetic spectrum between visible and radio waves.

Here, our Dr. Billy Teets pointed an infrared camera at his pet lizard, Niels Bohr, who was being held by a camper, to demonstrate the relationship between heat and infrared radiation. The camera easily identifies the relatively cool temperatures of the cold-blooded lizard and floor with black and blue tones, differentiating them visually from the campers’ warm arms and legs, which are shown with much “warmer,” bright yellow tones.

The discovery of infrared radiation has an interesting history. William Herschel, who also discovered Uranus two decades earlier, put a prism in sunlight to create a spectrum. He took temperature measurements in the different color areas finding a large disparity: red gave an average reading of 67/68 degrees above the ambient temperature, green gave 31-34 additional degrees, and violet light typically only gave a 2-degree increase. When he placed the thermometer outside of the spectrum–“beyond the red”–Herschel found that temperatures continued to rise, before eventually dropping off. This experiment demonstrated that “invisible” light was hitting his thermometer and that radiant heat has the same optical properties as light.

Infrared technology has many scientific and daily uses: NASA’s SOFIA mission studies the infrared universe in the stratosphere from a Boeing 747, many consumer electronic remote controls operate with IR, as does some night vision equipment.