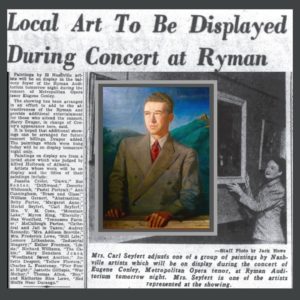 This Nashville Banner clipping from March 18, 1952, announced a one-night art show at the Ryman Auditorium that featured Muriel Seyfert, wife of Vanderbilt faculty member and future Dyer Observatory director, Carl Seyfert. Not only was Muriel an accomplished painter; she enjoyed many talents including being a renowned astronomer in her own right. In this juried show, she displayed her painting titled “Carl Seyfert.” It was likely this portrait she did in 1949 (see color insert) that is now displayed in the Dyer Observatory stairwell leading up to the Seyfert Telescope.

When plans were drawn up for the Dyer Observatory residence that housed the Seyfert family beginning in 1953, an oversized picture window was designated on its north side to not only give a nice view of the observatory, but to provide Muriel with beneficial light for her painting studio. The residence is currently an office and rental portion of the facility affectionately dubbed “Muriel’s Retreat.”

More information is available on the painting and Carl Seyfert on the Tennessee Portrait Project website.

Photo of the portrait by Nathan Griffin.